so, I decided to give te Eddy Fletcher Marathon Plan a go.

It’s basically a 12 week program with a 2 week taper for longer distance competitions, not excludingly Marathons, I hasten to add.

“Officially”, I plan to start CW 5 (30.01), but I will be using the time beforehand to acclimatise myself by doing the a few oft he rows in the correct sequence. This is also for collecting data for using the correct paces and such.

The plan itself, consists of 3 rotations of 4 weeks with 5 training sessions a week and a two week taper.
The reasoning behind the training method is simple – to achieve a fast FM your HR needs tob e about 80-90% of maximum fort he whole time – so this is what is trained. A lot of rows at 80-90% at rel. low rates.

I adapted the plan to use HR bands instead of % of HRmax. The HR bands are based on the Karvonen method of using the Reserve HR (HRmax-HRrest), which I beleive is a more accurate representation. 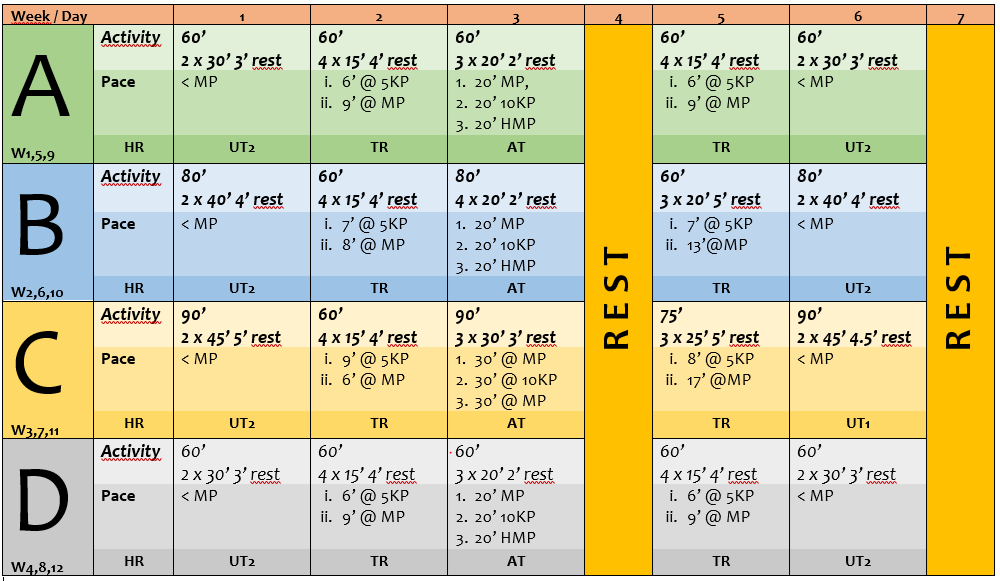 I did a HMmax test which consisted of 5x4Min intervals with 30 seconds rest. The Wattage produced was increased by 25W each interval until the last, which was a maximum effort. Result can be found here <link>.

Based then on the observed HRmax and measured HRrest (Polar H7 in the morning before getting out of bed) – this is my current HR band table, displaying the Karvonen values compared tot he HRmax %.

Well – so much for the theory, we will see how the practice goes :/